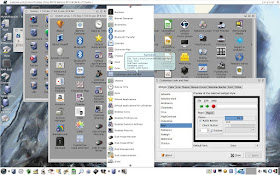 It's Christmas again! And, as like as we did three years ago, when we early-released a preview version of Icaros 2.2, we would like to repeat ourselves with a quite advanced beta of Icaros Desktop 2.3! After a short patrons-only early access, this new version of the distribution is now available for download (only the Live! edition is being "released" this time).

But what's new, exactly? Well, if you followed our recent development, you'll find in this version everything we put in last october's early preview, plus a far more advanced, simplier to use, version of HostBridge (this is for Linux hosted users only, though). Isn't this enough? So why not playing guitar with Frets/C++, AROS port of Frets on Fire? You will need an accelerated card to enjoy it, and even better a Guitar Hero controller to make the most of this game, but if you're into Bemani/Music games, you won't stop playing this for months! And if you're a more serious user, you can now show and edit spreadsheets from OpenOffice and Excel, while Icaros keeps track of your meetings.

Many things changed since version 2.2.8 and it's time to make a recap.

This is really interesting. ALB42 created a tool we really missed so much: a program that could read spreadsheets from modern office applications like Microsoft Excel and LibreOffice. And the best new is: it can also modify them! Yes, you can enter fields, change values and see applied formulas updating results in real time. Obviously, the program is still at its first stages, but simple spreadsheets will work flawlessly. I haven't called it a 'complete spreadsheet program' because the current interface includes just the most common tools, but LEU has great potential. 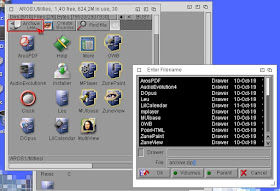 I have corrected a long-standing issue with the Archive button in our interface, which was not able to handle single files being compressed. With the old implementation, you had to select at least two files and left or right click to create a LHA or a ZIP archive including both. The functionality has then been extended to TAR archives using the central button, but the real news is that these actions will now ask you the name of the resulting archive, letting you save it where you prefer, and you can now compress single files as well. 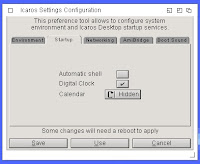 DigiClock is a commodity and should stay with other commodities. There were many unneeded files included with Icaros Desktop (mainly executables for other operating systems) and they have been deleted to save space. All distributed files have been included in the archive provided with Extras/Documentation which is, by the way, the place to find the sources for included programs, when available. Icaros Settings has been updated to reflect the change, with a new tab handling user-interface related programs being launched at startup.

ICAROS KEEPS TRACK OF YOUR MEETINGS 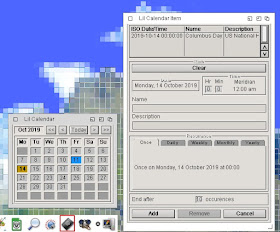 This required an incredible lot of work. I've been in contact with Nathan Hesterman, author of LilCalendar, since the day he uploaded it to aminet. I've helped him finding bugs and ironing out the user interface, begging him with feature requests. He's been incredibly friendly and let me fullfit a need I felt for many many years: a program which would start with Icaros and remind my schedule when needed. But, in order to keep the workbench clean, I had to set up a quite complex mechanism using the Activatewin utility. When Icaros Desktop starts, Lilcalendar is hidden to your sight, but it's working in the background. You can obviously change this behavor with Icaros Settings, which has been updated to handle this (Note: LilCalendar is OFF by default on hosted Icaros).

Quickly create your double-state, PNG icons using IconPoser, which was originally created to help develop this distribution... but it can be handful also to Icaros users! 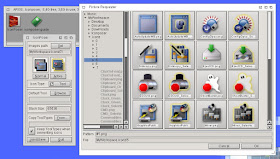 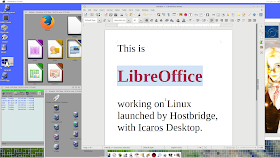 I wish to talk a little more about the 'rework' of HostBridge we're making with Nicola Scendoni, who is heavily helping me on the Linux side. Since its conception, HostBridge was meant as a way to let hosted-ÀROS interact with the hosting system, no matter if it was Linux, or Windows, or even something else. So you could use HostBridge to start Linux/Windows applications from Icaros, use them to load files as if they were simple shell commands, but this is only the surface of this feature. When digging it more deeply, you could discover that it can effectively used side by side to host's user interface or even replace it to some extent. Nicola and I, in a nutshell, are working in this direction and, in the future, you will be able to use Icaros Desktop as a complete desktop environment for Linux, with all the advantages it would give you: the simpleness, friendliness and tradition of Icaros Desktop, and the strenght, power, modernity and security Linux delivers.

This "Icaros Desktop Based Linux Desktop Environment" doesn't have either a name or an official release date yet, but the real news today is that most of its current technologies have been backported to mainstream Icaros Desktop and you can use them by yourself. For instance, during installation HostBridge detects all installed Linux applications and make them available when you first run Icaros Desktop. If you install other software afterwards, you can either refresh icons or add new programs to the AROS side using a script. Moreover, there were many issues found by hosted Icaros users that have been addressed in the new version. If you installed hosted Icaros on a 64bit Linux distribution, it didn't work until you installed also some 32-bit libraries. This has been handled with the installation script, which now downloads them from your Linux distribution repository and installs them automatically. Modern distros are not providing the ifconfig command anymore, which is still used by our scripts. This has been handled as well. Please remember our scripts are tailored for Ubuntu and Ubuntu derived distributions only, you will have to adapt them to other distributions by yourself.

You can spot even the first backports from Icaros 64. Yes: some of these features were originally developed for the 64bit edition and then ported back to the mainstream one. While the rework of MyWorkspace is much a 'under the hood' thing, the new ./icaros script for Linux hosted Icaros is a great addition to this distribution. It now behaves like a command, so you can give it arguments to customize your next Icaros session as you wish. Here's a little summary of new options:

MyWorkspace now works differently if you're using Icaros native, hosted on Linux or hosted on Windows. When running natively and on Windows, the usual directory called 'MyWorkspace' is created with all its subdirectories, and ASSIGNs for Documents, Pictures, Downloads etc point there. However, current Linux distributions provide common places in user Home directory for all these things, so there is no need to duplicate them. Icaros Desktop now detects if user changed locale settings on the Linux side, and modifies AROS ASSIGNs (Pictures:, Mousic:, Documents: etc) accordingly.

This was a long standing bug, which has finally been corrected. 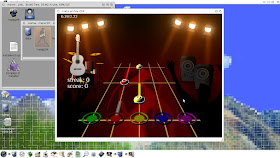 Icaros Desktop is FUN! Play guitar (well, almost...) with Frets on Fire C++ or chess with AmiFish (versus the AROS build of Stockfish, or another human being as opponent).


A LOT OF SOFTWARE UPDATES

OTHER ADDITIONS
There are also many other little/great additions and enhancements here and there, like the following: 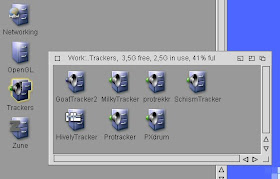 - added deark to sys/C
+ This version is setting RPTAG_PenMode for AROS in every situation
- added new BMPX datatype from Miker
- added/replaced many missing icons (shell, AAEDT and others)
- created a new directory in Extras, "Trackers" for all audio trackers
- moved all trackers out of Extras/MediaEditors, changed description
- moved Protrekkr to Extras/Trackers: no more available in Light edition
- created the new alias 'ltasks' to replace broken TaskList command
- created S:ctask to check if a specific task is running
- fixed a bug in LiveUpdater not copying new Icaros settings in Env-Archive

Many features of Icaros are being reworked, enhanced, modified to make them more robust and easy to use.


Please also remember this is just a beta: you can already use it instead of your old 2.2.8 installation, but there might be still some little issues to address. Let us know what you think in our forum @Aros-Exec!

You can find the download link here. Please read our release notes there carefully: